The most relevant assumptions for the Oracle SOA Suite Kubernetes Enterprise Deployment Guide (EDG) topology are related to the database and web tiers. Typical on-premises production systems keep their high end database (such as RAC, RAC+DG, Exadata, Autonomous Database) out of the Kubernetes cluster and manage that tier separately. This implies that the database runs separately from the Kubernetes cluster hosting the application tier. The database provisioning and configuration process is out of the scope of the Oracle SOA Suite Kubernetes setup. Typically, it is administered and maintained by different teams and the Oracle SOA Suite Enterprise Deployment Guide would need to consume just the scan address and database service to be used for the RCU and data source creation. Similarly, the demilitarized zone (DMZ) will likely remain untouched: Customer investments in load balancers (LBRs) are well consolidated, and the security and DMZ policies are well established. Using an HTTP proxy in the DMZ has become a standard. Additionally, Single Sign On (such as OAM and others) may remain for some time and those are best addressed in the web tier than as part of the Kubernetes cluster.

Due to total cost of ownership reasons, the Kubernetes control plane uses a stacked etcd. External etcd is also possible but, given RAFT protocol’s reliability, this option requires a significant amount of additional setup work and three additional nodes just to host the etcd system. 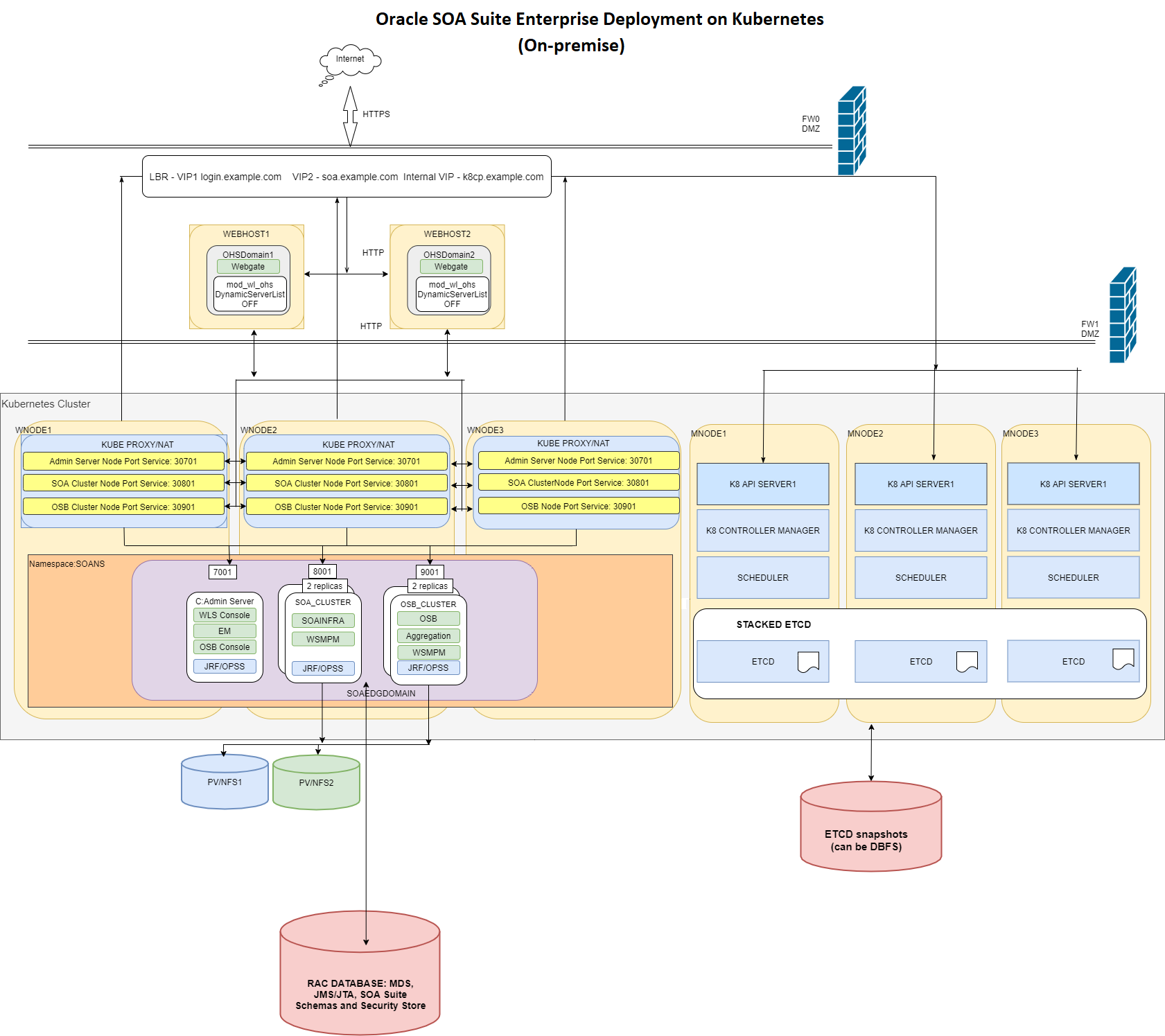 The control plane consists of three nodes where the Kubernetes API server is deployed, front-ended by a load balancer (LBR). The LBR exposes the required virtual IP address (VIP) and virtual server (VS) for both the Oracle SOA Suite and the control plane itself (although an internal-only VS can also be used). This URL must be site or data center agnostic in preparation for disaster protection. The control plane and worker nodes must be able to resolve this hostname name properly AND SHOULD NOT USE IPs for it. As explained in the assumptions section, the etcd tier is stacked with the kube-api servers. Each control plane node runs Kubernetes kube-api, kube-controller, kube-scheduler, and etcd instances pointing to local etcd mounts. The etcd has been tested by the Maximum Availability Architecture (MAA) team on DBFS, NFS, and local file systems. No significant performance differences were observed between the two options for an Oracle SOA Suite system. However, this decision may require additional analysis in each customer case depending on the usage by other apps in the same cluster. Using etcd directly on DBFS allows shipping etcd directly to secondary data centers and allows flashing back quickly to previous versions of the control plane using DB technology. However, it creates a dependency between etcd and the database that is discouraged. The etcd snapshots CAN, however, be placed on DBFS to simplify the continuous shipping of copies to secondary regions and leaving it to Data Guard. These are the options that will be applicable or not depending on the customer needs:

Oracle SOA Suite internal applications and custom deployments on SOA (composites) and WebLogic (ears, jars, wars) are run on three worker nodes in the Kubernetes cluster. The typical allocation on Kubernetes places the WebLogic Administration Server on the first node and each of the servers in the Oracle SOA Suite and/or Service Bus clusters in the other two. This can vary depending on the workloads and kube controller and scheduler decisions.

The application tier is critically dependent on the Kubernetes DNS pods to be able to resolve the scan address for the RAC database.

The internal Oracle SOA Suite and Service Bus clusters use some of the configuration best practices prescribed for on-premises systems. Refer to the Enterprise Deployment Guide for Oracle SOA Suite 12c (12.2.1.4):

There are significant differences with an on-premises Enterprise Deployment Guide. The most relevant are: