When you see these kinds of errors, it means that Kubernetes cannot find your container image. The most common causes are: 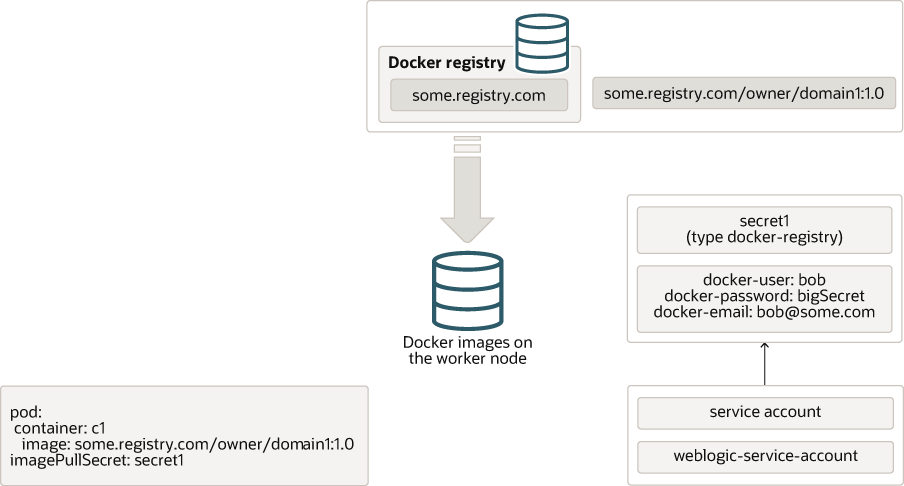 The definition of the pod contains a list of container specifications. Each container specification contains the name (and optionally, tag) of the image that should be used to run that container. In the previous example, there is a container called c1 which is configured to use the container image some.registry.com/owner/domain1:1.0. This image name is in the format registry address / owner / name : tag, so in this case the registry is some.registry.com, the owner is owner, the image name is domain and the tag is 1.0. Tags are a lot like version numbers, but they are not required to be numbers or to be in any particular sequence or format. If you omit the tag, it is assumed to be latest.

The tag latest is confusing - it does not actually mean the latest version of the image that was created or published in the registry; it just literally means whichever version the owner decided to call “latest”. Docker and Kubernetes make some assumptions about latest, and it is generally recommended to avoid using it and instead specify the actual version or tag that you really want.

There is another setting called imagePullPolicy that can be used to force Kubernetes to always pull the image, even if it is already present in the local container image store.

If the image is available in the remote registry and it is public, that is it does not require authentication, then Kubernetes will pull the image to the local container image store and start the container.

If the remote container registry requires authentication, then you will need to provide the authentication details in a Kubernetes docker-registry secret and tell Kubernetes to use that secret when pulling the image.

where actual values should replace the strings in angle brackets. Note that the docker-server is set to the registry name, without the https:// prefix; the docker-username, docker-password and docker-email are set to match the credentials you use to authenticate to the remote container registry; and the namespace must be set to the same namespace where you intend to use the image.

Here is an example of part of a domain custom resource file with the imagePullSecret specified:

To add the secret shown previously to the default service account in the weblogic namespace, you would use a command like this:

You can provide multiple imagePullSecrets if you need to pull container images from multiple remote container registries or if your images require different authentication credentials. For more information, see Container Image Protection.

If you are not able to use a remote container registry, for example if your Kubernetes cluster is in a secure network with no external access, then you can manually copy the container images to the cluster instead.