The Design View helps you specify the necessary data needed to run the WebLogic Image Tool to build an image for running the WebLogic domain. 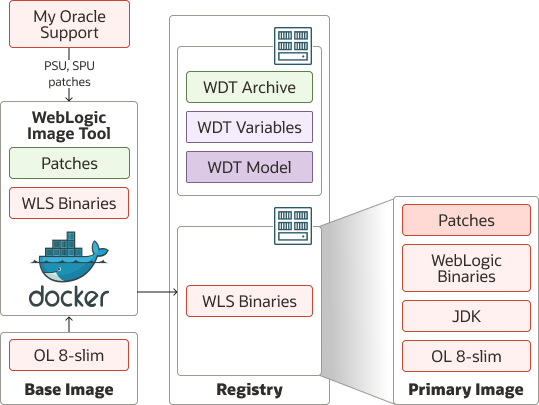 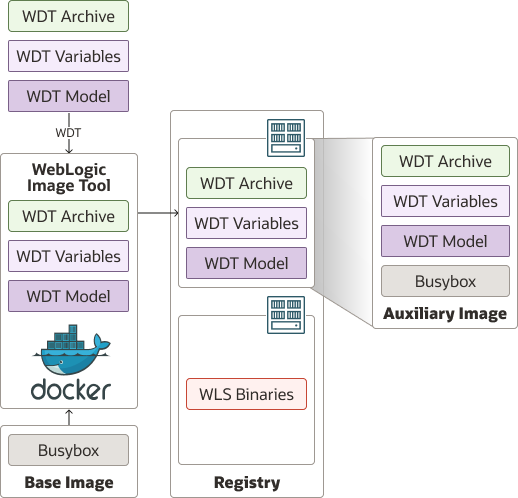 If you select to create a new primary image, you’ll see the following basic panes and a few advanced panes on the Primary Image Design View page. If you select to create a new auxiliary image, you must select the Auxiliary Image Design View page, to configure it. Note that not all the fields described in the following sections for the Primary Image, are relevant for an Auxiliary Image. The exceptions are noted.

Base Image to Use

When using a custom base image, the application requires the image to be inspected using the WebLogic Image Tool’s Inspect Image command. Note: This action is relevant for Primary Images only. To invoke this inspection, click Inspect Custom Base Image. This inspection tells the application if Java or the Oracle Fusion Middleware software is already installed in the image. If it finds either of these software packages installed, then fields in the Installers for Building the Image pane will disappear because they are unneeded.

In the current release, the Patch Oracle Home pane will disappear if the base image contains an Oracle Fusion Middleware installation. The rationale being that the act of patching a base image installation will bloat the size of the image. As such, it is better to either create the base image with the latest patches already installed or allow the WebLogic Image Tool’s multistage build to install and patch the Oracle Fusion Middleware installation while minimizing the resulting image size.

Installers for Building the Image

This pane will contain form fields for up to three installers (depending on the base image being used); they are:

When specifying the JDK Installer, it is important to remember that this installer will be used to install the JDK inside the Linux x64 image being created. Therefore, the Linux JDK Installer to Use field should always point to the Linux x64 compressed archive installer (for example, jdk-8u291-linux-x64.tar.gz). While the value of the JDK Version field is just a tag associated with the installer used to specify which version of the JDK installer that the WebLogic Image Tool should use, the best practice is to set the value to the real version number (for example, 8u291 or 1.8.0_291).

For “Model in Image” or “Domain in Image” domain locations, when building your primary or auxiliary image, Oracle strongly recommends using WDT 2.0. Certain WKT UI actions, such as Prepare Model, may rewrite the model into a format that earlier WDT versions cannot parse.

NOTE: This pane is relevant for Primary Images only. Oracle strongly recommends patching all Oracle Fusion Middleware installations with the latest Patch Set Updates (PSUs) and other recommended patches to ensure that the latest security fixes are applied. This pane configures the WebLogic Image Tool to apply the specified patches to the Oracle Home during the image creation process. There are two mechanisms for specifying that patches should be applied:

Use the Individual Patches to Apply field to specify individual patch numbers to apply. These patches will be applied after any patch bundles specified.

The WKT UI application requires that valid Oracle Support credentials be specified using the Oracle Support Username and Oracle Support Password fields. This allows the WebLogic Image Tool to automatically discover the latest PSU and recommended patches and download any patches specified as part of the image creation process.

As a last resort, if no valid Oracle Support credentials are available, the patching process can be skipped by disabling the Apply Patches option. To make sure your WebLogic-based applications are as secure as possible, this really should be a last resort.

This Advanced pane applies only to images using either the “Model in Image” or “Domain in Image” domain locations.

For “Domain in Image” only, the Domain Type field tells WebLogic Deploy Tooling what type of domain to create. Use the Domain Home Directory to change the location of the WebLogic domain directory inside the container. For “Model in Image” and “Domain in Image”, the Model Home Directory field specifies the directory where the WDT model files are stored in the image and WDT Home Directory specifies the WDT home directory inside the image. Typically, there is no need to override these directory locations because the application defaults follow the recommended best practices.

This Advanced pane supports altering the default behavior of the WebLogic Image Tool, as well as extending the image build process to include custom build steps that might be required by particular applications or environments.

For any images intended to run in an OpenShift environment, where the configured Security Context Constraints cause the containers to run as a random user in the root group, select Make Image Compatible with OpenShift. This option changes the default group name to root and gives the group file system write access, as required by OpenShift. For more information, see Managing security context constraints in the OpenShift documentation.

If the base image is expected to change without the image tag changing, then enable Always Pull Base Image. With this option enabled, the image build process will always pull a new version of the base image to ensure that the latest version is being used. Otherwise, the base image will be pulled only if it doesn’t already exist in the local machine’s image cache.

The Image Build Network Name field allows an image build to run when the build process needs access to another container, such as a database that might be running in a container that is needed while WDT is creating the domain. Because the current release doesn’t support creating JRF domains during the image build process (that is, for the “Domain in Image” domain location), it is unlikely that this field will be needed. However, it is surfaced for completeness.

For the Primary Image, the Code View displays a shell script that you can use as a starting point for automating the image creation process. For the “Model in Image” domain location, there is a similar Code View page for the Auxiliary Image. Each page shows the script for creating and pushing its image.

If it is not already selected, then use the Script Language drop-down menu to choose the desired scripting language. Note that the application is providing a working sample script simply to show how the process might be automated. Before using the script, review the script and make any changes necessary for your environment. One typical change that would be considered a best practice would be to change the script to accept either command-line arguments or externally set environment variables to specify any credentials required by the script to eliminate hard-coding the credentials in the script itself. This change is left as an exercise for you because different environments typically will have existing standards for securely handling such credentials.

At a high level, the action performs the following steps:

At a high level, the action performs the following steps: