The operator is packaged in a container image which you can access using the following docker pull commands:

The operator registers a Kubernetes custom resource definition called domain.weblogic.oracle (shortname domain, plural domains). More details about the Domain type defined by this CRD, including its schema, are available here. 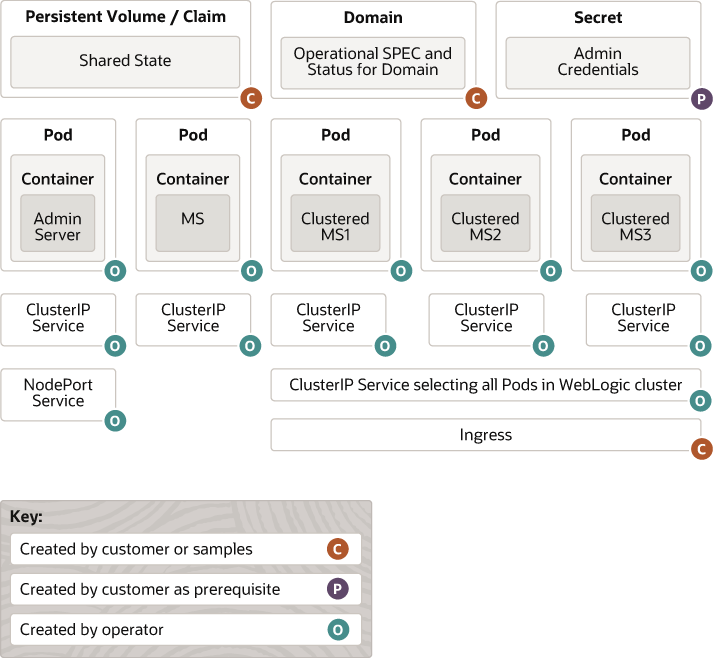 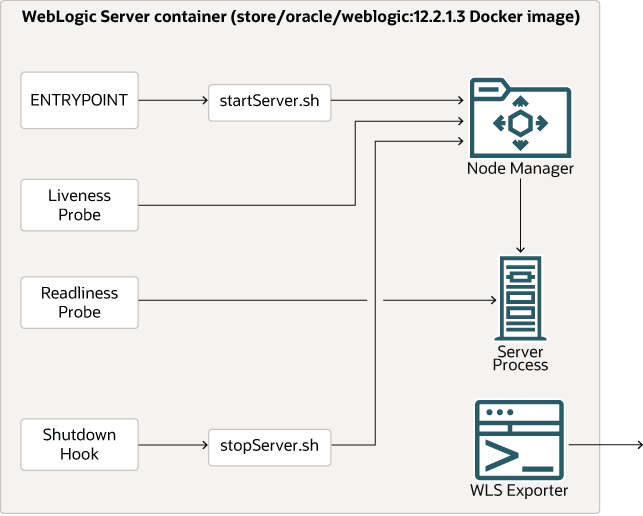 The Domain specifies a container image, defaulting to container-registry.oracle.com/middleware/weblogic:12.2.1.4. All containers running WebLogic Server use this same image. Depending on the use case, this image could contain the WebLogic Server product binaries or also include the domain directory.

During a rolling event caused by a change to the Domain’s image field, containers will be using a mix of the updated value of the image field and its previous value.

The operator expects (and requires) that all state be stored outside of the images that are used to run the domain. This means either in a persistent file system, or in a database. The WebLogic configuration, that is, the domain directory and the applications directory may come from the image or a persistent volume. However, other state, such as file-based persistent stores, and such, must be stored on a persistent volume or in a database. All of the containers that are participating in the WebLogic domain use the same image, and take on their personality; that is, which server they execute, at startup time. Each Pod mounts storage, according to the Domain, and has access to the state information that it needs to fulfill its role in the domain.

The external state approach allows the operator to treat the images as essentially immutable, read-only, binary images. This means that the image needs to be pulled only once, and that many domains can share the same image. This helps to minimize the amount of bandwidth and storage needed for WebLogic Server images.

This approach also eliminates the need to manage any state created in a running container, because all of the state that needs to be preserved is written into either the persistent volume or a database backend. The containers and pods are completely throwaway and can be replaced with new containers and pods, as necessary. This makes handling failures and rolling restarts much simpler because there is no need to preserve any state inside a running container.

When users wish to apply a binary patch to WebLogic Server, it is necessary to create only a single new, patched image. If desired, any domains that are running may be updated to this new patched image with a rolling restart, because there is no state in the containers.

It is envisaged that in some future release of the operator, it will be desirable to be able to “move” or “copy” domains in order to support scenarios like Kubernetes federation, high availability, and disaster recovery. Separating the state from the running containers is seen as a way to greatly simplify this feature, and to minimize the amount of data that would need to be moved over the network, because the configuration is generally much smaller than the size of WebLogic Server images.